Bats eat a lot of different things, including blood, frogs, fish and birds. Most bats eat either fruit, some kind of plant material like nectar, or insects. In Idaho, our bats are insectivorous. This means they eat insects. (From Katherine at Pioneer School of the Arts in Boise)

2: Why do bats hang upside down?

Bats hang upside down because being up high keeps them safe from predators and it's a really good place for bats to take off from. Bats don't have very strong feet like birds, so hanging from the ceiling allows them to take flight easily. (From Avery at Dalton Elementary School in Dalton Gardens)

Bats fly because their wings are especially designed for flight. Their wing membranes have two layers that are tight. Flight for bats comes from lift, thrust and drag. So, the bat wing creates an air flow that allows the bat to go up and maintain their flight through air circulating around their wings. (From Katelan at Prospect Elementary School in Meridian)

4: How many fingers do bats have?

Bats have five fingers. In fact, the scientific name for bats is Chiroptera, which means hand wing. (From Cooper in Boise)

5: How many species of bats are there?

Many bats live in large numbers in caves, but there are a lot of bats that live in trees. They can live under the bark in small groups or underneath giant leaves that they use as modified tents in the tropics. Some bats even live all by themselves at the very top of trees, hanging by one foot and wrapping themselves with their tail so they look like a pinecone. Bats live as far north as Alaska and as far south as Argentina. (From Dominic at Dalton Elementary School in Dalton Gardens)

Echolocation is how bats see in the dark. They scream out and listen for the returning echoes. They produce sounds from their larynx, just like people do, but their sound is ultrasonic, or high frequency. We typically can't hear these sounds with our human ears. (From Ashley at Lewis and Clark Middle School in Meridian)

Bats are pretty much the ecological equivalent of birds, except they operate on the nighttime shift. Bats have vision but their vision is adapted to dim light. This, along with the fact that they use echolocation, is why they are active at night. (From Kensie at Cole Valley Christian School in Boise)

9: Do bats have night vision?

Bats can see to some extent in the dark. Bats' eyes are developed to illuminate things, so their eyes are a little different from our eyes. Our eyes are equipped to have higher resolution, and bats' eyes are equipped to have higher illumination in the night. Remember, there are 1,200 plus species of bats that make their living in all different ways. Those that use echolocation as their dominant sense often have very tiny eyes and don't use them as much. Other bats may not use echolocation, but instead they use the footstep sounds that the bugs make and also use their eyes for hunting. (From Ararea at Dalton Elementary School in Dalton Gardens)

Chiroptera, or the order of bats, is divided into two suborders, mega and micro bats. Mega means large. These bats are much larger, often with a six-foot wingspan. Micro bats are much smaller, and their eyes are very different too. The mega bats use their vision for getting around and foraging. They typically don't echolocate. Micro bats, on the other hand, depend almost exclusively on echolocation. (From Dillon at Dalton Elementary School in Dalton Gardens) 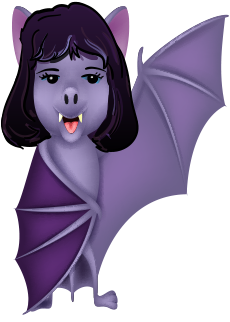