Blood is a complex and very important part of our body. We cannot live without it. There is no replacement or substitute for blood. Blood performs many jobs for our bodies and is continuously working around the clock. Blood is the red liquid that is pumped by your heart through your veins and arteries. This is called the circulatory system. Blood takes food and oxygen to all of the cells in your body and removes waste away from the cells. Let's learn more about this amazing tissue called blood.

What is blood made of?

Whole blood makes up about 7% of a person's body weight and consists primarily of red blood cells, white blood cells, platelets and plasma. The average human adult has about 1 ‐ 1½ gallons of blood traveling through their circulatory system.

Red blood cells, also known as erythrocytes, are created in the bone marrow and are constantly being replaced. Each one lives on average, for about 120 days. They make up about 40% of our blood. They have a concave shape ‐ sort of a donut with the hole slightly filled in. Red blood cells contain a protein know as hemoglobin which makes our blood red. Red cells use the hemoglobin to carry oxygen from the lungs throughout the body. Oxygen is needed for all of the other cells in the body to live. Red blood cells also remove the carbon dioxide which your body produces as a waste product and transports it to the lungs where it is exhaled. They are responsible for taking nutrients from the food we eat to all our cells; from the tiny cell at the end of our big toe, to the cells of our brain.

White blood cells, or leukocytes, help the body fight infection. They too are created in the bone marrow and they can live as short as one day up to months in the body. There are several kinds of white blood cells and each kind has a special job. Some can attack and digest most types of bacteria. Some help to remove dead cells in the body and kill parasites and invading organisms. Some release histamines when pollen, food or other matter that the body sees as an invader, enters and triggers an allergic response. Some release antibodies ‐ a kind of army that fights infection. Some even have the ability to “remember” certain invasive bacteria and keep the body from being sick from that intruder again.

Platelets are also known as thrombocytes and are made in the bone marrow. They live about six days before they die. Their job is to coagulate blood and help it clot. When a cut or other injury takes place, the platelets cause the blood to become thicker and to bunch up to plug up the hole. This will stop the bleeding. When the injury is healed the clot will dissolve and be swept away through the blood stream as part of the waste products.

Plasma is a clear, yellow liquid that keeps the various other cells fluid and moving through the veins and arteries. Plasma is 90% water and also contains minerals, vitamins, nutrients, proteins and other dissolved materials necessary for the health and function of the body.

The body's ability to get the blood from the heart, through the lungs, and back to the heart again is crucial to one's health. The heart squeezes the blood and pushes it through the blood vessels. Your blood pressure is the force that the blood exerts against the walls of veins and arteries as it moves through them. Blood pressure is measured using a sphygmomanometer. This tool measures two readings and shows them as a fraction. The top number is known as the systolic number and the bottom number is known as the diastolic number. Normal is considered 120/80. If the numbers are repeatedly higher than this guideline, then the person is said to have high blood pressure or hypertension. Repeated low readings are called hypotension. The blood pressure changes during the day and can read higher or lower due to temperature, activity level, age, stress, health, food, medicine and other factors.

As the blood moves through the body, it actually moves through the blood vessels in a rhythm with the beat of the heart. This rhythm, or heart rate, is our pulse . The pulse can be felt in specific locations of the body such as the wrist, the temple, and the throat. Never measure the pulse with the thumb because the thumb has a pulse too and determining which pulse you are feeling could make your measurement off. The pulse is counted in beats per minute. Your normal resting heart rate could be anywhere between 70 beats per minute to over 100.

Transferring blood products from one person to another person is known as a transfusion. If someone loses a lot of blood in an accident or during surgery, doctors can give them replacement blood that has been donated. Blood cannot be manufactured, so blood from another human must be used. Only a small number of the population is able to donate blood for storage. The blood is taken from the donor using a needle inserted into their arm. This blood is then kept cool and stored until required by someone in need. The whole blood must be used before 42 days have passed, in which time unused blood will be destroyed. Portions of the blood can be transfused as needed. Red blood cells, white blood cells, platelets or the plasma can be separated out and transfused for certain medical conditions.

Even though blood can be shared between a donor and a patient, the two must have compatible blood types. There are four basic types of human blood; A, B, AB, and O. Type O can be given to any person, no matter their blood type. But doctors must check a patient's blood type before giving them donated blood of any other type. Giving a patient the wrong blood type can cause illness or death. Blood has antigens (proteins or sugars) attached to the outside of the blood cells. These antigens can set off a reaction if the antigens are different than the patient's antigens in a transfusion. The body's immune system may attack the new blood cells.

Blood is further identified as positive or negative based on something known as the Rh factor. So in addition to having one of the four blood types, the positive or negative indicator applies too, leaving the blood types to be: A+, A-, B+, B-, AB+, AB-, O+, or O-. There are additional factors of some blood that will further impact a transfusion. For more information about blood types visit Kidhealth.org.

Bruises can occur when someone falls or is hit with something such as a baseball. Blood vessels under the skin are broken and blood empties into the tissue without leaving the body. It isn't like a cut where the blood comes out onto the skin. But instead the blood can pool under the skin causing abnormal coloring. As those blood cells begin to die, they change color from the red we associate with blood, to shades of purple, green, and brown. This is known as a bruise. Over time, the body absorbs those dead cells into the blood stream where they are carried away as waste.

Blood is an incredible material that is responsible for so many processes in our body. We often take it for granted. Sometimes things go wrong with blood. Take a look at just a few conditions that impact our blood's health.

Scientists who study blood and look for ways to treat blood disorders are known as hematologists. Learn more about this science here.

Many invertebrate animals such as coral, jelly fish and flat worms do not have blood because they are able to absorb nutrients and move gases and wastes directly to the outside of their bodies.

Blood comes in other colors. Earthworms, leeches, and insects have green blood. Starfish and many other invertebrates have clear or yellowish blood. Lobsters and crabs have blue blood because it contains copper instead of iron.

To learn more about other animals' blood and circulatory systems, click here. 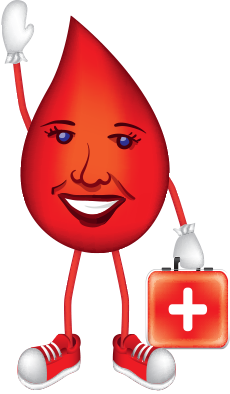