Everything that has weight or mass and takes up space is called matter. Matter is the “stuff” in our world. Reach out and touch the nearest piece of furniture. That is matter. So are the clothes you are wearing, your hair on your head, and the air you are breathing. When we learn about matter, we are learning about chemistry. Matter can be broken down into the very smallest pieces to learn what makes it what it is. Let's take a look…

All matter is made of small particles known as atoms. They are what make up the air, the water, our bodies, food, trees, cars, even the computer from which you are viewing this web site. Atoms are so small that you cannot see them. But, in the period at the end of this sentence, there could be more than 4 billion, billion atoms. Atoms are made of three subatomic particles known at protons, neutrons and electrons. The protons and the neutrons huddle together to make the nucleus. The electrons orbit around the nucleus.

Each of those subatomic parts can be broken down some more. Scientists continue to learn more and more about atoms. It can get very complicated, so for now let’s stick to the terms listed above.

There are different types of atoms and atoms combine in special ways to make up all of the matter in our world. That is why cat fur is so different from the steel bumper on a car. But both are still made of atoms. Atoms are different in the number of protons and electrons they contain.

Matter can change in different ways. A physical change happens when we cut a piece of paper into two chunks. It is still paper, just a different size. We could change the temperature of a glass of water, mix two different paint colors together, or cut a carrot into pieces. Despite all these different changes, the substances are still water, paint or carrot.

Chemical changes happen when we make changes to the matter at the chemical level. The most obvious evidence that a chemical change has taken place is found when heat, light, bubbles, fizzing, flames, or gases are given off. A permanent change to its color will often occur.

When you strike a match, for example, there is a sound of fizzing, there is heat, and there is a strong smell as gases are given off. These are signs that a chemical change has happened. You've actually created a new chemical.

Sometimes a chemical change happens in a slow reaction — like rust. Rust happens over a long period of time when iron is exposed to oxygen. But rust is a new chemical. It isn't the iron and it isn't the oxygen; it is rust.

As far as scientists know, everything in the universe is made up from a little over 100 elements. Elements make up the basic ingredients that we call matter. An element is made from only one type of atom. Some matter is made from just one element. For example, oxygen is one of the basic elements, and is made only of oxygen atoms.

The Periodic Table of Elements is used to organize the elements for easy identification. The Periodic Table groups elements by their atomic weight. Most elements occur naturally in the universe, but a few have been created by scientists in laboratories. This Interactive Periodic Table from Idaho National Laboratory will help you learn more.

Although a few things in our world are made of just one element, such as oxygen, carbon, or gold, many are a combination of two or more elements. Water is made of two elements chemically bound together. When elements are chemically bound together, they are known as a compound. There are 2 atoms of hydrogen and 1 atom of oxygen in water. We call it H20. A compound is written in such a way as to allow us to identify the chemical recipe. We call this a formula.

H20 shows us that there are 2 atoms of hydrogen bound to each atom of oxygen.

Matter can exist on earth in a solid, a liquid or a gas form. Water is a solid as ice, a liquid when we drink it, and a gas when it is steam. Science has found out that there are additional states of matter. But solid, liquid and gas forms are the easiest and most obvious in our day to day world.

Visit Science Trek's States of Matter site to learn more about the different states of matter.

Did you know that the glue used in Post-it brand notepads was an accident? So was the fabric protectant known as Scotchgard. This product was accidently spilled on a lab assistant's shoe and when it was discovered that no dirt would stick to that spot, a new product was born. Both chemicals were invented in a laboratory at 3M. But they were not originally intended for the application they ended up creating. Many products we use in our everyday lives are the result of chemistry. Some surprising ones were the result of lucky accidents.

Some chemicals can be very powerful. Because of this, CHEMICALS SHOULD NEVER BE TASTED WITHOUT ADULT SUPERVISION.

Acids are sour and can be strong enough to corrode through metals. Some acids such as lemon juice or vinegar we can eat. Other acids are used in batteries to make them run. Those types of acids are DANGEROUS and should be handled only by people specially trained to work with them.

Bases are the opposite of acids and taste bitter. Soap is a common base found around the house. If you have ever accidently gotten shampoo in your mouth while washing your hair, you have experienced its bitter taste. Many bases are very harmful because they can destroy cells.

Reminder: CHEMICALS SHOULD NEVER BE TASTED WITHOUT ADULT SUPERVISION.


Sometimes people use an antacid to solve their stomach upset. An antacid is a base which, when dissolved in the stomach's acid, neutralizes that acid and takes away its acidic qualities. The acid no longer bothers the person's stomach and they feel better. Chemistry at work in our lives.

The study of matter and its changes is the science of chemistry. There is so much more to study and to know about chemistry. Scientists are learning more and more about chemistry each day. Chemistry allows scientists to create medicines to keep us well. Chemistry is responsible for turning used milk jugs into carpet for homes and schools. Chemistry allows scientists to determine what kinds of matter make up the planets and stars, even from millions of miles away. Chemical changes happen even inside our bodies to allow digestion and other amazing processes. Keep learning about chemistry and you might be the future scientist who finds a way to power cars using the air we breathe. 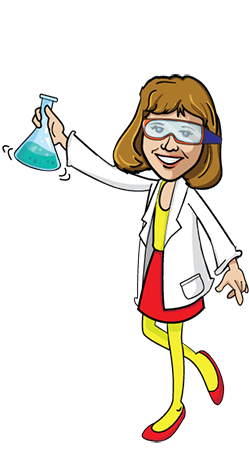