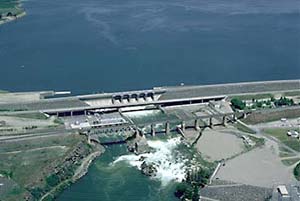 There have been two American Falls Dams. The first was built from 1925–1927 and the second from 1974–1978. The second dam is located immediately downstream from the original. The first dam was so deteriorated by 1975 that the reservoir was only holding two thirds of its capacity.

The replacement dam was designed and constructed by Bechtel Corporation. It is currently operated by the Bureau of Reclamation and provides irrigation, flood control, power generation, recreation, and the improvement of fish and wildlife resources.

The city of American Falls was moved to its current location in 1925 before the original dam was constructed. The old townsite was flooded when the reservoir filled, as were segments of the Oregon Trail. Some of the buildings of the old town can still be seen when the water is low. The brick United Methodist Church was taken apart, moved and reassembled at its present site on the corner of Fort Hall Ave. and Polk St.

Before the old dam was replaced, it faced a challenge. In 1976, the newly-constructed Teton Dam collapsed as its reservoir filled. The American Falls Dam, which was downstream, was in danger. The dam would be receiving more water at one time than ever before, so in order to protect it and the other dams downstream, the outlet works were opened to their fullest. The reservoir was emptied. Two days later, the floodwaters reached the American Falls Dam, but they didn't overflow the spillway.

Today American Falls Dam, along with the other parts of the Minidoka Project, play an important role in the agriculture base of southern Idaho. The main crop in this area is alfalfa. Over 1,800 acres of Minidoka Project lands grow Idaho's famous potatoes. Apples, barley, beans, sugar beets, corn, hay, onions, pears, peas, prunes, and rye are also grown, but to a lesser extent.

Many of the region's people are also served with water from this reservoir.

This dam consists of a central concrete gravity dam with embankment wings on both sides of the gravity section. A gravity dam is constructed of concrete and/or masonry and relies on its weight and internal strength for stability. Gravity dams are generally used where the foundation is rock, and earthfill of the necessary quality and quantity is not available.

The west embankment is 750 ft long and is earth and rockfill. The east wing is the original 1,600-foot long earth embankment and a 2,400-foot long section of the original concrete gravity section. This part of the original dam was strengthened by the placement of rockfill against the upstream face and zoned earth and rockfill on the downstream face. The spillway of the dam consists of five bays. Each bay has a 44-ft by 25-ft radial gate.

The dividers between the bays are 8-ft thick concrete piers, which support the gate supports, the gate hoists, and the highway bridge. There are nine 7 ft 2 in by 7 ft 2 in conduits through the concrete dam located below the spillway which make up the outlet works. Each conduit has a 7-ft by 7-ft regulating gate. There is an irrigation outlet to the left of the outlet works with a 5-ft by 5-ft commercial slide-type gate, which guards the pumping plant. There are three 18-ft diameter penstocks, which run through the right end of the concrete gravity section all the way to the Idaho Power Company powerplant. A 16 by 19.5 ft fixed wheel gate is located at the intake ends of each penstock.