The Minidoka Dam is located on the Snake River near Rupert, Idaho on County Highway 400, north of Acequia. 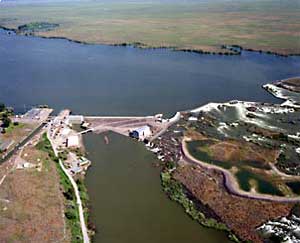 The Minidoka dam was the first Reclamation Service project in Idaho. It is an earthfill dam eighty-six feet high and nearly a mile long. Construction began in 1904; most of the canals and laterals were finished by 1906.

Between 1908 and 1909 the first federal power plant in the northwest was installed at Minidoka. Costs far exceeded estimates. By 1909 the total cost for the dam had reached $5.8 million.

The Minidoka dam was the first of five dams built in the Minidoka project. The Minidoka Project proposed to bring water into the southeastern areas of Idaho near the cities of Rupert and Burley. These uninhabited sagebrush deserts now boast some of the richest farmland in the state.

Minidoka farmers had electricity long before other rural areas. Farmers and nearby townspeople formed cooperative utility companies, built their own distribution systems, and contracted for power from the dam, selling it to themselves.

In 1974 the dam and power plant were placed on the National Register of Historic Places. The power house is open to the public on weekdays as well as weekends during the summer. Walcott Park, close to the dam, is a popular picnic area. Headquarters for the Minidoka National Wildlife Refuge is adjacent to the park. The 25,000 are refuge was established in 1909 by president Teddy Roosevelt.

The Minidoka Project supplies a supplemental water supply to more than 1 million acres of land. The five reservoirs have a storage capacity of 2,784,600 acre-feet. The Minidoka Dam itself provides for irrigation, power production, flood control, recreation, and fish and wildlife resources. The reservoir created by the dam is called Lake Walcott, named after a Reclamation engineer. It has a storage capacity of 210,000 acre-feet. The lake extends 26 miles up the Snake River and has a shoreline of 80 miles.

There are two sections to the spillway. One is an uncontrolled overflow weir section and the other is a controlled section using radial gates. The spillway is 2,385 ft long.

At the dam water is diverted into a canal on each side of the river. The North side canal supplies the Minidoka Irrigation District with water. It is an 8-mile long gravity canal and lateral stem with an initial capacity of 1,700 cubic feet per second. The south side canal is 13 miles long and has an initial capacity of 1,325 cubic feet per second. It is a canal system with three large pumping plants; each plant lifting water 30 ft for a total of 90 ft. This canal serves water to the Burley Irrigation District.

The concrete power plant has nine generating units with a total capacity of 2,7700 kilowatts.