The Lucky Peak Dam is located on the Boise River 17 miles northeast of Boise on Highway 21. 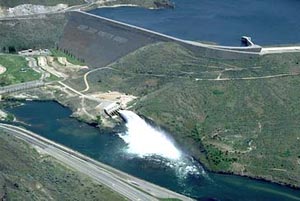 Construction of the Lucky Peak Dam began in 1949 and was completed in 1955. It was an Army Corp of Engineers project which included four dams: Anderson Ranch Dam, Arrowrock Dam, and the Boise Diversion Dam.

The dam was first built with only one outlet and the potential for hydropower. The power output from the single outlet proved to be inadequate, so a second hydropower outlet was built. Construction of the second outlet was completed in August of 1986. As the outlet was finished modifications were started on the first outlet, which were finished in January of 1987. Construction of the powerhouse was done from 1984 to 1988 when it went online.

The original dam had six flip bucket discharge gates which deflected water upwards in a spectacular plume. The water at the gates traveled approximately 70 miles per hour. This type of release method reduces the erosion downstream. It was later modified by dam operator Idaho Power Company which installed power-generating turbines, eliminating the popular plume.

Lucky Peak Dam is a rolled earthfill or embankment dam. The dam is 2,340 feet long, 340 feet high and cost $19 million to build. The spillway has a free-overflow concrete ogee crest that is 600 ft long. The outlet works are located in the left abutment.

It has a diameter of 23 ft with six 5 ft 3 in by 10 ft slide gates and a 30 in hollow jet valve. There are emergency gates located in the intake tower, which are 10 ft by 23 ft Broome type gates. The storage capacity of the reservoir is 300,000 acre-feet. The reservoir is 12 miles long with 45 miles of shoreline.