The Dworshak Dam is located on river mile 1.9 of the North Fork of the Clearwater River, just outside of the city of Orofino, Idaho. 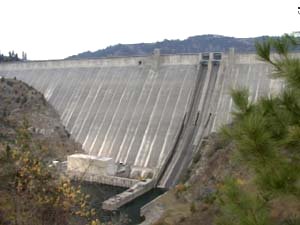 The U.S. Army Corps of Engineers began construction of Dworshak in 1966. It first became operational for flood control in 1972 and the powerhouse went online in March of 1973. The dam was named after Henry Dworshak, a U.S. Senator for Idaho.

There are 3 power-generating units at Dworshak, and the Governor authorized 3 more in 1990. However, controversy halted the expansion project. Currently, Dworshak is only producing half the power originally projected, even though the generators have been installed. Peak loads would cause such a flood downstream that a second dam would have been needed at Lenore. Due to citizen opposition, the second dam was rejected, and the Governor revoked the authorizations for generator numbers 4, 5 and 6.

In June of 1980 the dam developed a leak through a 236-ft. long crack on the reservoir side. 7,700 gallons per minute of water was sprayed past the powerhouse down into the river. The cost to fix the leak exceeded $1 million. The U.S. Army Corps of Engineers drilled seventy holes into the dam to intercept the crack, relieving pressure on the dam. A plastic sheet was then lowered over the crack. This reduced the flow by half. Additional repairs including a patch made of sawdust, cement and volcanic ash further reduced the flow to an acceptable level.

Controversy surrounded the construction project from the outset. Says Cort Conley in Idaho for the Curious, “There have always been more politicians than suitable damsites. Building the highest straight axis gravity dam in the Western Hemisphere, on a river with a mean flow of 5,000 cubic feet per second, at a cost of $312 million, in the name of flood-control, is the second-funniest joke in Idaho. The funniest joke is inside the visitor center: a government sign entreats, ' . . . help protect this delicate environment for future generations.'”

“The North Fork of the Clearwater was an exceptional river with a preeminent run of steelhead trout, and the drainage contained thousands of elk and white-tail deer. The Army Corps of Engineers proceeded to destroy the river, habitat, and fish; then acquired 5,000 acres for elk management and spent $21 million to build the largest steelhead hatchery in the world, maintaining at a cost of $1 million dollars a year what nature had provided for nothing.”

The Dworshak Dam has a Visitor's Center; check with the Corps for open hours.

The Dworshak National Fish Hatchery at the southeast end of the North Fork Bridge at Ashahka is open during daylight hours, and visitors can take a self-guided tour.

The storage capacity of the reservoir created by the dam is 3,453,000 acre-feet. It is 53 miles long extending into the Bitterroot Mountains. The total power output from the dam is 380,000 kilowatts. Unit one produces 200,000 kilowatts, while units two and three both generate 90,000 kilowatts apiece.

Dworshak is a straight axis gravity dam at 717 ft. in height with a crest length of 3,287 ft. The total cost to build the dam was $312 million. There is twice as much concrete in Dworshak Dam as in Cheope's Great Pyramid in El Giza, Egypt.