Cabinet Gorge Dam is located outside of Clark Fork, Idaho on the Pend Oreille Scenic Byway, Idaho Highway 200. Clark Fork is about a fifteen-minute drive from the Idaho-Montana border. 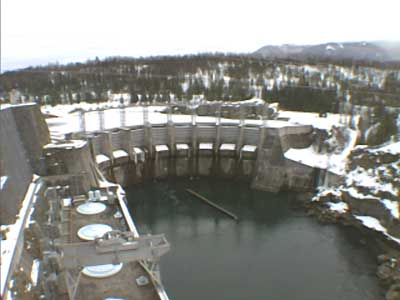 The Cabinet Gorge Dam was built by Morrison Knudsen Corporation, a worldwide construction firm that, when the dam was built, was headquartered in Boise, Idaho.

The dam was a project sponsored by the Defense Program. The designer and supervisor of the project, Ebasco Services, Inc., contracted with Morrison-Knudsen. Construction began in 1951 and ended in April of 1952. Total cost of the dam was $47 million.

The dam had to be constructed in one season so spring floods would not wash away the temporary cofferdams. The dam was actually completed in half the time estimated by the Defense Program. The construction company claims that it was also completed at half the cost.

It takes a lot of force to keep a dam standing against the incredible force of the water. The strength of the Cabinet Gorge Dam lies in the outward forces the arch design places on the canyon walls.

The dam is a true arch dam, which is 208 ft high and 600 ft long. Throughout the whole dam its thickness never exceeds 40 feet.

The first step in construction of this dam was the diversion of the Clark Fork River to clear a construction site. 32 tons of dynamite blasted 50,000 cubic yards of rock down the canyon walls of the river. The blast was felt 32 miles away in Sandpoint. Water was then shunted through a pair of tunnels each 1000-ft. long.

Cofferdams were built above and below the site to divert the water. Half a million cubic yards of rock were excavated.