Earth is a unique planet in our solar system. It has liquid water and it has life. Two rare qualities, as far as we know. How much do you know about your home planet? There is a lot to learn and much to explore.

Earth is the 3rd planet from the sun. It orbits approximately 93 million miles from the sun. That isn't exact because the earth's orbit is not a perfect circle, but more of an oval or an ellipse. So this distance can change over the course of a year.

The earth floats in space on a tilt. This is called its axis. This tilt is about 23.5 degrees from perpendicular. This tilt is important to the seasons.

A day is the time it takes the earth to turn on its axis one complete turn. This takes 23 hours, 56 minutes and 4.1 seconds. We usually say that a day lasts 24 hours — even though that isn't exactly correct. A year, then, is the time it takes to go once around the sun. This is much longer — 364 and ¼ days. We can't use a quarter of a day efficiently, so we just say 365 days. Then every 4 years we celebrate an extra day. This is called "leap year." This allows us to use 4 of the ¼ days all at once. So in February we have an extra day added to the calendar every fourth year.

Earth is 24,901.55 miles (40,075.16 kilometers) around at the equator, but slightly shorter if measured around from pole to pole. This means that the earth is not exactly a sphere, but more squashed and shaped with a bulge in the middle. The diameter, or distance through the earth is 7,926.41 miles (12,756.32 kilometers) from the equator on one side to the equator on the other.

The earth is covered in layers of gases known as the atmosphere. Nitrogen, oxygen and other gases make up a great portion of the atmosphere. The atmosphere creates the earth's weather, protects the planet from radiation, asteroids, and comets, and helps to regulate the temperature. The oxygen in the atmosphere is needed by most of the life on the planet and the carbon dioxide is necessary for green plants to perform photosynthesis. But these gases must be in balance for life to exist and to be sustained. Too much of any of the gases would be a dangerous situation.

Layers of the Earth

Earth is known as one of the rocky planets because it has a hard outer layer of rock. This is known as the crust. The crust can vary in depth from the ocean bottom to the highest of mountains, where it can be up to 31 miles deep. The crust actually floats as continental plates also known as tectonic plates. The continents are the highest parts of these plates. These plates actually move constantly while floating on the mantle.

The mantle is a layer of the earth that is made of thick, hot, melted rock. Its temperature is continually heating and cooling which causes movement within this layer. The heat causes the liquid mantle to rise up towards the crust, cool and then fall toward the outer core where it is heated again. This continuous churning is known as convection and is the cause for the plates of the crust to move. They bump into one another and even sometimes crunch into one another causing earthquakes.

Below the mantle is the outer core and the inner core. These layers are also melted and extremely hot. The outer core is made of various minerals, but these minerals are so hot that they stay in liquid state all of the time. The inner core is made of iron and nickel. It is compressed by the weight of the other layers to the point that even though the minerals are melted, they cannot move and so behave as if they are a solid.

While the continents are the taller portions of the plates that stick up out of the ocean, the oceans actually take up more than 70% of the earth's surface. The oceans contain nearly 95% of the world's water. But it is undrinkable, because it is salt water. The remaining 5% is found in the earth's lakes, rivers and streams.

There are 5 oceans. The Arctic ocean is found at the North Pole. The Pacific Ocean is the largest of the oceans. The Atlantic Ocean is the second largest. The Indian Ocean is near India. And the final Ocean is known as the Southern Ocean. At one time it was called the Antarctic Ocean since it is located near Antarctica. But over time it has changed names.

The ocean is constantly in motion. Waves on the surface of the ocean form due to wind, temperature and weather, along with the spinning of the earth. Waves get larger as they get closer to shore. As they roll into the land along a shoreline, they actually "break" and crash forming froth and making the loud crashing noise we all recognize. Some can be very strong in size and force.

The ocean also contains "rivers" or currents that act as pathways all around the globe. Early ocean travelers mapped these and became very comfortable using these to navigate their way from place to place. Currents are very reliable and never change more than a few miles. The same currents that were used in the days of Christopher Columbus can still be traveled today.

In addition to the currents, the ocean moves in and out from the shore in regular intervals known as tides. The gravity of the moon actually pulls on the ocean. This pulling makes the ocean bulge just below the moon. At the same time, the water becomes more shallow in other parts of the world. As the earth turns and the moon moves in an orbit around the globe, the bulging changes location. This creates high and low tides. The differences on some beaches can be extreme. Occasionally, this change can leave boats or sea creatures without water or strand beachgoers from getting back to their beach.

The tectonic plates and their movements are responsible for the fact that Earth is the only planet with mountain ranges. Mountains are caused by folding and wrinkling of the crust brought on by the plates pushing against one another.

Mountain ranges have numerous mountains in rows or long collections. The mountains make for beautiful scenery, but they also allow the formation of snow collection that will melt in the spring seasons and become the beginnings of rivers. Without this, water would not recycle in the water cycle the way that it does. Water also collects into lakes which allow for large bodies of fresh water for plant and animal life. This water then evaporates, forms clouds which then release their moisture in the form of precipitation and the entire cycle begins again. Check out our water cycle information in one of these sites: Trees or Dialogue4Kids Rivers.

Some mountains are created by volcanoes. These tend to stand as singular cones or domes from volcanic activity and do not form a range. They are also formed because of the tectonic plates and are usually found where two plates come together. Other planets and moons in the solar system do have evidence of volcanoes.

Rivers and lakes help to funnel the snow melt to the ocean. Most of the water on the earth moves from the high mountains into small streams and eventually into large rivers where it is finally carried to the oceans. This can take years and years for this process. By the time it arrives in the ocean, it is mixed with salt water and would not be usable for drinking. When it evaporates and comes back down as rain, the water no longer contains the salt and is again drinkable and usable by plant life. The water cycle is truly amazing. The earth could not maintain life without this process.

Another amazing attribute of the earth are the magnetic poles and their fields. The core of the earth produces a field of magnetic energy which surrounds the planet much the same way as the magnetic field of a common bar magnet. The magnetic north allows the needle on a compass to point towards that direction. The earth also has a magnetic south. These poles do not stay in the same place continuously. They shift from time to time and are not aligned with the geographic poles that we associate with the axis of Earth. They are actually off by miles from where the earth turns on the axis.

The swirling of the earth's core and the other layers under the crust cause the poles to shift location. They have even been known to flip — north is south and south is north - every few hundred thousand years or so!!

And if you understand how a compass works, you would also understand that we call the North pole north because the needle on the compass points to north, right? Wrong! The needle is pointing to the negatively charged pole or the south if you were thinking magnet. Yup — you got it. The North Pole is really the negatively charged pole because the north end of the compass needle is attracted to the opposite charge of the earth. But we still call it the North pole because that is what is has always been called.

And speaking of charges, the Aurora Borealis or Northern Lights are caused when charged electrons and protons from the sun, collide with particles in the earth's atmosphere and put off a form of energy that can be seen with the naked eye. This produces a glow that shifts and moves near the polar region. There is also one at the South Pole known as the Aurora Australis or Southern Lights.

Again, a pretty amazing property of this planet Earth!!

The seasons provide a growing period for food producing plants. Foods such as fruit start out as seeds, grow into adult trees or bushes, flower, grow the fruit and drop seeds again for the next growth period. This is simplified, however, without the seasons, the plant would not have the opportunity to go through all of those phases. The seasons actually signal the plant to perform each phase. Birds, bees, weather, farmers and other elements of the growing process get signals from the seasons to participate in their role in this series of events.

Earth Day was formed on April 22, 1970 after an oil spill off the coast of California encouraged an emphasis on how humans have an impact on the earth. Since that day, Earth Day has been celebrated every year as people all over the world have put more thought and energy into recycling, repurposing, and reusing the earth's resources to protect the earth from pollution, global climate change, deforestation, and other forms of environment damage due to human influence.

We only have one Earth. If we don't take care of it, what will happen to the plants, animals, water, atmosphere and humans that exist here?

Many people are finding ways to make better choices in their responsibility to the earth. What can you do?

The earth is full of fascinating places and landmarks — let's take a look at those that meet the mark on size. 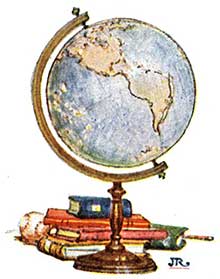 "Earth" in Speech and Writing

When do you capitalize the word 'earth'? Here are some guidelines. 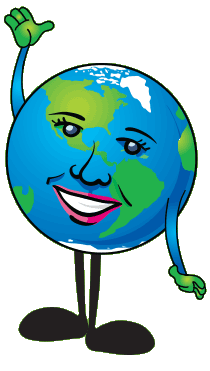