Tracking Trash: Flotsam, Jetsam, and the Science of Ocean Motion (Scientists in the Field Series)

This is the story of two oceanographers who tracked ocean currents to find out where garbage ends up when it gets into the water. From cargo that gets accidently swept overboard ships to trash that is deliberately thrown into the water, these scientists explore the dangers created by our waste, what it can do to marine life, and how it contributes to ocean pollution.

Where Does the Garbage Go?

This is a Let's Read And Find Out Science book, Level 2. It is designed for children who read or are read to. Great drawings help tell the story of where our trash goes after we throw it away.

This is a book in the Young Discoverers: Environmental Facts and Experiments series. It focuses on the difference between biodegradable and non-biodegradable garbage and how to recycle to help the environment. It gets kids thinking and doing.

Recycle! A Handbook for Kids

Another book for early recyclers who are ready to learn about why, how and what to recycle. For early readers or children who love to be read to about science.

Photographs and detailed text will guide you through the process of composting. Turn garbage into usable soil and watch nature do its thing! 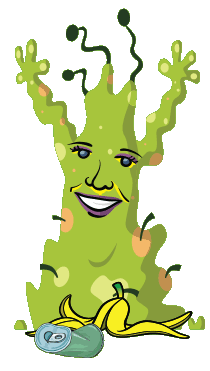