The word robot comes from the Czech word “robota” which means “forced work or labor.” We use the word "robot" today to mean any man-made machine that can perform work or other tasks, either automatically or by remote human control. Some robots do work according to instructions programmed in advance, while others must have a human giving continuous commands. Robotics is the science and study of robots.

What Do Robots Do?

Robots are sometimes thought of as devices for the far-off future, or as something in science fiction. But the truth is that robots are part of our lives today. In fact, robots are all around us! Our world is inhabited by machines that can talk to us, listen to us, perform as asked, and even solve problems without specific direction from humans. However, the most common uses of robots involve them acting as substitutes for human labor, doing work that humans could do but that robots are better suited for.

Imagine you worked at a factory, and your job was to tighten one screw on a toaster. And imagine that you did this action over and over again, on toaster after toaster, day after day, for weeks, months or years. This kind of job is better done by robots than by humans. Most robots today are used to do repetitive actions, or jobs considered too dangerous for humans. A robot is ideal for going into a building that has a possible bomb. Robots are also used in factories to build things like cars, candy bars, and electronics. Robots are now used in medicine, for military tactics, for finding objects underwater and to explore other planets. Robotic technology has helped people who have lost arms or legs. Robots are a great tool to help mankind.

A Brief History of Robots

Robots seem like a modern day invention, but in reality evidence suggests that automations were created for everything from toys to parts for religious ceremonies in ancient Greece and Rome. Leonardo da Vinci sketched plans for a humanoid robot in the late 1400s. Jacques de Vaucanson was famous in the 18th century for his automated human figure that played the flute and for a duck that could flap its wings. These early automations were often controlled by ropes, wheels, air or water.

Many automated inventions that could behave in similar fashion to a human have been documented throughout history. Most were created largely for entertainment purposes. Fiction writers found great success in writing about robots in all sorts of situations which meant that the robot was part of daily conversation and imagination. Elektro, the first speaking humanoid robot built in 1939, could speak 700 words and perform tasks such as blowing up balloons. In 1956 George Devol and Joseph Engelberger formed the world's first robot company. By the 1960s robots were introduced into the General Motors automobile plant in New Jersey for moving car parts around. Robots continued to develop and can now be found in homes as toys, vacuums, and as programmable pets. Today robots are a part of many aspects of industry, medicine, science, space exploration, construction, food packaging and are even used to perform surgery. Watson, a robot with artificial intelligence from IBM, defeated the human players in an episode of Jeopardy!. There are social robots with facial expressions, unmanned aerial vehicles (UAVs) that monitor hurricanes, robo-bees that help with crop pollination, and much more. The science of robotics will continue to advance in ways we can hardly imagine!

So Why Use Robots?

One reason robots are used is that it is often cheaper to use them instead of humans. It is easier to have robots do some jobs, and sometimes using robots is the only possible way to accomplish some tasks. Robots can explore inside gas tanks, deep under the ocean, or inside volcanoes. They can explore the surface of Mars, search for survivors after a disaster, or go to dangerous places where extreme temperatures or contaminated environments exist.

Robots can also do the same thing over and over again without getting bored. They can drill, they can weld, they can paint, they can handle hazardous materials, and in some situations, robots are much more accurate than a human ‐ which can cut back on production costs, mistakes or hazards. Robots never get sick, don't need sleep, don't need food, don't need to take a day off, and best of all they don't ever complain! There are a lot of benefits to using robots.

Parts of a Robot

In movies and comic books, robots usually look and act like humans, communicating and doing things like people would. Robots that look like people are called humanoid robots. But most robots are designed for a specific industrial use and do not look like human beings.

Robots can be made from a variety of materials including metals and plastics. Most robots are composed of 3 main parts:

All of these parts are designed to work together to control how the robot operates. As well as programming robots to be as intelligent as possible, scientists also work hard on building robots that can perform a number of complex movements as well as utilizing a variety of sensors. The creation of a robot by engineers and scientists follows the steps of the Design Process. Learn more about the Design Process at Science Trek’s Inventions site.

Nano-robots or nanobots are robots scaled down to microscopic size in order to put them into very small spaces to perform a function. Currently nanobots are still in the developmental stage. Future nanobots could be placed in the blood stream to perform surgical procedures that are too delicate or too difficult for standard surgery. Nanobots could fight bacteria by tracking down and eliminating each bacterial cell or could repair individual organ cells in the body.

Imagine if a nanobot could target cancer cells and destroy them without touching healthy cells nearby. Nanobots would probably carry medication and surgical tools on board. They would need to be able to navigate through the human body and then find their way out too. Nanobots could be used in other situations too. Tiny nanobot gears and tools could allow construction of objects at the tiniest of scale. Some of the things we only imagine in science fiction could one day be reality. Maybe you will one day be a scientist who works with nanobots.

Robots are especially useful in space exploration because, unlike human explorers, they can survive in space for long periods of time and can safely do things that humans cannot do. They can be built to do things that would be too risky or impossible for astronauts. For example, they can withstand harsh conditions such as extreme temperatures on distant planets or high levels of radiation. They can collect samples, take measurements, and send pictures back to Earth.

Some computers and robots have been developed to act with human-like behavior. A machine with artificial intelligence is one that can perceive its environment and change its behavior accordingly, while using tools at hand to solve problems or reach goals it has been programmed to achieve. Face recognition software, complicated scheduling software, or computer games that give players a response based on the players’ actions are all forms of artificial intelligence. At the present time, insect intelligence is a particular focus of research and development because insects and their behavior are easier to mimic. Nanobots could be based on insect behavior, working in swarms together to perform a function.

Simple problem-solving can be accomplished by an AI robot through the process of gathering facts about a situation, then comparing this information to stored data, running through various possible actions and predicting which action will be most successful. Chess-playing robots are one example of this kind of machine.

Other kinds of robots have been designed with the ability to “learn” in different ways. Some robots can learn by mimicking human actions and have been taught to dance by scientists demonstrating dance moves. Other kinds of robots can learn to use information from previous activities to make future decisions. These learning robots recognize if a certain action (moving its legs in a certain way, for instance) achieved a desired result (navigating an obstacle). The robot stores this information and attempts the successful action the next time it encounters the same situation. In other examples, a robot that fills a box with cookies might be able to “count” the number of cookies in the box, or a robot could determine the amount of traffic on a street to calculate when to change the light. This science is in the early stages, but robots are being developed that can make decisions in order to serve food, translate words from one language to another, and get information from outside resources to solve problems.

Unlike in the movies, robots are unable to think or make decisions without human input; rather, they are tools to help us get things done. Robots are machines with programmed movements that allow them to move in certain directions or sequences. Artificial intelligence has enabled robots to process information and to learn; electronic sensors allow them to receive information about their surroundings and choose actions based on that information. But they are still limited by the information that they are given, the problems they are instructed to solve, and the functions they are programmed to perform. It is important to remember that because humans are the source of robots’ intelligence, it is humans who control these tools and who decide how to use them to improve people’s lives. 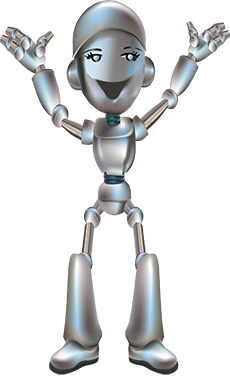