Once upon a time a person needed to move something heavy. He or she picked up a long stick and stuck it under the edge of the heavy object and then pushed down on the other end of the stick. And the first simple machine was invented. Simple machines are just that. The simplest form of using one thing to accomplish something faster or better. A tool. They were the first ones created and we still use them today.

There are 6 basic simple machines; the lever, the wheel and axle, the inclined plane, the wedge, the pulley, and the screw. Several of these simple machines are related to each other. But, each has a specific purpose in the world of doing work.

But what is work? Work is the amount of energy necessary to move an object. The further you move it, the more work is required. Work is measured in Newtons. More about that later. First let's look at each of the 6 simple machines in detail.

The lever is a long tool such as a pole or a rod put under an object to lift it. The lever is more efficient when combined with a fulcrum. The fulcrum is another object, perhaps a rock, used to brace under the long tool. This gives the long pole something to push down against. The location of the fulcrum helps determine how well the lever will perform work. The closer the fulcrum is to the object being lifted, the easier the person can lift the object. The longer the lever, the higher the object can be lifted. Do the math — it's really all in the distance between the object, the fulcrum and the lever.

Levers are all around us. Some examples of levers are: door handles, the claws of a hammer (for removing nails), crowbars, light switches, bottle openers and hinges.

The wheel has always been considered a major invention in the history of mankind. But it really would not work as well as it does had it not been for the axle. An axle is a rod or pole centered in the wheel that allows the wheel to turn around it. The wheel then spins in a balanced circle to be used as transportation on a bike or to turn the hands of a clock. Gears are a form of the wheel and axle.

Wheels are found where things turn in a circle such as an electric fan, a motor, a revolving door, a merry go round, and any wheel — on the car, on your skateboard, or on a bicycle.

The inclined plane is simply a ramp. One end is higher than the opposite end. This allows things to go from a low point to a higher point. Or vice versa. It takes the same amount of work, but less force, to move an object up a ramp than to move it vertically. Gravity makes it easier to move an object down a ramp than up that ramp.

Ramps are used in skateboard parks, wheelchair ramps and to get heavy equipment in and out of the back of trucks. But a modified version of a ramp is also found in stairs, escalators, ladders, walking paths, even chutes used for dropping your mail into the mailbox.

Some people might see the wedge as just an inclined plane, although it is actually two inclined planes. However, the use of a wedge is actually different in nature. The wedge is used to separate an object apart. This is needed to cut, tear or break something in two. A wedge can also be used to keep things together or secure things from movement.

Some examples of wedges that are used for separating might be a shovel, a knife, an axe, a pick axe, a saw, a needle, scissors, or an ice pick. But wedges can also hold things together as in the case of a staple, push pins, tack, nail, doorstop, or a shim.

The pulley is actually a version of a wheel and axle that is combined with a rope, chain or other cord to allow moving something up and down or back and forth. The pulley can be combined with other pulleys to reduce the amount of work necessary to lift huge amounts of weight or to lower them down. It can also make moving something such as a flag up the pole convenient to do from the ground. It changes the direction of the force necessary to do the work. I pull down on the rope, but the flag goes up.

The screw is really a twisted inclined plane. It allows movement from a lower position to a higher position but at the same time it moves it in a circle. That makes it take up less horizontal space. A screw can also act to hold things together in some cases.

Some examples of the uses of a screw are in a jar lid, a drill, a bolt, a light bulb, faucets, bottle caps and ball point pens. Circular stairways are also a form of a screw.

Another use of the screw is in a device known as a screw pump. A huge screw shape is lowered into the water and by turning the screw the water is moved up the twisted shaft and lifted to where it is needed. Screw pumps are often used in agricultural settings such as farms and for irrigation.

Work is the amount of energy necessary to move an object. A person can push against a brick wall until they sweat. But unless they moved the wall — even a tiny bit — they did no work. But at the same time, if you scoot the computer mouse even a part of an inch, you have done work. Work in the scientific sense. Don't try to convince your parents or your teachers that you have done a lot of work by playing video games.

Work can be measured. It is measured by the amount of distance that a force moves an object. Sir Isaac Newton was a very famous scientist who had a wonderful understanding of the relationship between force and motion. For this reason, the measurement is known as a Newton. It is abbreviated with a capital N. The term joule is often used to measure work as Newtons per meter. If it takes 1 Newton to move any object 1 meter, then that is equivalent to a joule.

There are special tools for measuring the force necessary to move an object. These are known as force meters. They use a spring and a hook to determine how much pull is required to slide an object up an inclined plane. Really very simple to use.

A lawnmower combines wedges (the blades) with a wheel and axle that spins the blades in a circle. But there is even more. The engine probably works in combination of several simple machines and the handle that you use to push the lawnmower around the yard is a form of a lever. So even something complicated can be broken down into the simplest of machines.

Take a look around you — can you figure out what simple machines make up a can opener, the hand cranked pencil sharpener, the ice dispenser in the refrigerator or the stapler? Just be careful, though. In our modern times, many things rely on electronics and light waves to function and are not made of simple machines. But even then, you may be surprised. The turntable in your microwave oven is a wheel and axle. The lid to the laptop is connected to the pad by a hinge or lever.

Simple machines may be simple — but they are simply everywhere.

A Word or Two About Rube

Rube Goldberg was a famous cartoonist who lived between 1883 and 1970. His life was spent creating art and sculptures, but his most famous work was for his "inventions." These inventions were a series of simple machines put together in a complex fashion to accomplish something very simple, but it took many steps to get there. Contests have been run for many years since Mr. Goldberg first created his unique ideas. In the contests people try to come up with new ways to turn on a light, or start a toaster using these combinations of the simple machines to wow judges and audiences for their unique way of doing these simple tasks.

Rube Goldberg machines are fun to watch and to build. Visit this site for some fun — see if you can identify each of the simple machines as they work together in this animation of a Rube Goldberg gadget designed to get this guy out of bed in the morning. Click here.

For more information about Rube Goldberg's life and his art, click here. 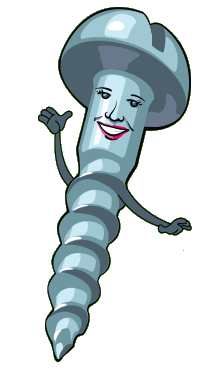