Soil usually starts as a rock. The rock gets rained on, frozen, or falls and it breaks into small pieces where you have a lot of little rocks or grains. Matter, like a leaf or animal waste, gets added to that over thousands of years. Water and air become a part of the mixture, and this is what we call soil. (From Kaden at Kamiah Elementary School in Kamiah)

2: Are there more creatures that live in the dirt or more that live on land onEarth?

3: Are there different kinds of soil?

There are different types of soil across the world and countries use different systems for describing soils. In the United States, we have 12 main types of soil that we call orders. Then, if you describe those soils in detail down to their finer properties, there are about 15 to 20 thousand unique soils in the United States alone. (From Ryenne at Dalton Elementary School in Dalton Gardens)

That can vary. Soil can be a few centimeters thick or meters thick. It depends on its position on the land form, how resistant to weathering the parent materials are, or the age and its exposure to weathering. (From Jahal at Owyhee Harbor Elementary School in Boise)

5: How many layers of soil are there?

When scientists talk about the layers, they are talking about the horizons. The horizons are unique layers, usually parallel to the surface, and they differ from one layer to the next. Most know of the three layers called topsoil, subsoil, and parent material. Those are just broader categories of the layers. The top soil is the part on the surface. It usually has more organic material in it and it's a little darker in color. It's also crumbly and soft and allows us to plant our gardens in it. Beneath that is the subsoil. It's lighter in color because it has less organic material. Then below the subsoil is the parent material. This layer is the unweathered sediment from which the soil is formed. (From Curtis at Dalton Elementary School in Dalton Gardens)

6: How does soil give nutrients to plants?

Soil stores a lot of the nitrogen, phosphorus, potassium, and other nutrients that plants need both in the solution and attached to the clay and organic particles in the soil. When water moves through the soil, it picks up some of those nutrients and moves them to the plant roots where they are able to take them up and use them for their biomass and the processes that they need. (From Aaron at Basin Elementary School in Idaho City)

Yes, there are parts of the soil that are very alive as the soil has many micro-organisms too tiny for the eye to see. In one teaspoon of soil, there are a billion bacteria. So, soil is definitely alive. (From Reanna at Hawthorne Elementary School in Boise)

8: Is soil different from dirt?

Soil is the scientific term we would use to describe that intact part of the Earth's crust that supports plant life. Dirt is usually a term used to describe soil out of its place of origin or when it has been removed from the Earth's crust. You may say you have dirt under your nails or on your boots. (From Evan at Owyhee Harbor Elementary School in Boise)

9: How long does it take for something to break up and make soil?

Soil is usually brown because of organic input from dead plant or animal material that gets incorporated into the top layer. Soil, however, doesn't have to be brown. It can be red, blue, purple, pink, white, or all kinds of color. Iron oxide may make soil a reddish brown color. Certain materials in the parent matter may make soil, like sand, where all organic matter has been stripped away, appear white. It is the organic matter that typically makes it brown. (From Justin at Cynthia Mann Elementary School in Boise) 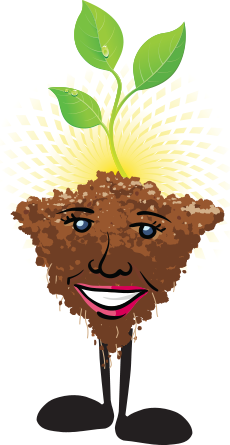