Water is a compound of and hydrogen. It is scientifically known as H2O; two hydrogen atoms attached to every oxygen atom. Water is a very important natural resource that is found everywhere on the earth. It fills our lakes, our rivers and our oceans. It exists in our atmosphere. It soaks beneath the soil and collects just below the surface. It is in the food we eat, the plants that grow and the animals that live and breathe in all parts of the earth. Without it there could be no life on Earth. In fact, nearly three quarters of our planet is covered by water.

Water has some amazing properties that make it very unique. Water is the only substance on Earth that can exist naturally in all three "states" — a liquid, a solid and a gas. As a solid, it is ice. We all know the liquid form because we drink it, bathe in it, swim in it, and pour it. When water is heated up to just the right temperature it turns into a vapor — like the steam rising off of your cup of hot chocolate. Learn more about states of water here. You might also want to visit Science Trek's States of Matter site.

Besides being the only substance on earth that can perform these feats, water has some other tricks many do not know about. Take a look at these facts:

The earth has a limited amount of water. We have the same amount of water on earth today as we did millions of years ago. We keep using the same water over and over again. Water keeps recycling around and around in a closed system called the water cycle. It does this by changing its state.

When the sun heats water in the oceans, the lakes or rivers some of the water turning into water vapor in the air. The water vapor forms into clouds as it cools. This is known as condensation. When the drops of water get big enough in the clouds they become too heavy and fall back to the earth as precipitation, otherwise known as rain, hail, sleet or snow.

Sometimes we take water for granted because it seems like there is a never-ending supply. After all, if you look at a picture of Earth from space it is one big blue ball! What we see is the surface water that exists in lakes, rivers, ponds, streams, glaciers, polar ice caps, snow, mud puddles, and oceans.

Freshwater constitutes the remaining 3% of the earth's water. Most of this freshwater is frozen in glaciers and icebergs. So the liquid freshwater must provide for the rest of the planet. That isn't very much when you consider the number of people, plants and animals that must share this freshwater.

Surface water is easily polluted or contaminated. Mud, animal waste, parasites, chemicals, garbage, and other foreign matter can make the water unusable. This contamination of surface water contributes to many deaths over the globe where clean water is not available. In areas where communities have the power to clean their water before use, this danger has been avoided. Read more about surface water here. Here's more about oceans, and more about freshwater.

Groundwater is water beneath the earth's surface. It filters down between the layers of rock and soil and ends up in underground collection places known as aquifers.

Most of the water we use in Idaho comes from groundwater. Wells are dug to get groundwater from aquifers. The water is pumped out to be used on farms, in industry, for city water supplies and other uses. Ground water is often safer to use than surface water. The layers of soil and rock that the water must trickle through to get to the aquifer actually cleans and filters pollutants from the water. Read more about groundwater here.

The water over a given geographic area tends to drain from the mountains to the lowest point; usually a river or a lake. This includes all streams, rivers, ponds, lakes, and groundwater that drain into the same general area. This geographic area of water drainage is known as a watershed. It can be quite large, but does not necessarily need to. Learn more about watersheds — even find a map of the watershed you live in by your zip code here.

How do we use water?

Water isn't just for drinking, it is also used for growing crops, cooking, cleaning and transportation. Water is used for cooling, for running equipment or for moving heavy loads. We also use water to generate power, to fight fires, for sanitation, in manufacturing, in mining and much more.

Water is used for recreation ‐ for boating, waterskiing, and swimming. In its frozen form, it offers additional recreational opportunities such as ice skating, hockey, skiing, and snowboarding.

Water is so important to life on the earth. Humans found ways early in history to manage and use water as a tool.

Early in history water was used as a tool to drive waterwheels for grinding and sawing. Water was also used as transportation for rafts and canoes. In the logging industry, trees that had been cut floated down rivers to get them to wherever they were needed for building or for other uses. Over time, boats, ships, submarines, and aircraft carriers have been added to the long list of water friendly transportation.

Since water has long been used for cleaning ‐ water has been a means for getting rid of substances that were waste. Washing clothing, bathing, preparing food, personal hygiene, and toileting were at one time in history all done in the local river. This may sound disgusting to people living in modern 21st century, but even the animals used the river for similar purposes. Drinking water from the local lake, pond or river was done without regard to how truly clean it might be.

Conservation of water is something that everyone can do. We only have so much water on this earth and so learning to use it wisely is important to us all. If we damage it to the point that there isn't any left or what is left is no longer usable ‐ then we are all in trouble. Conservation of water is about learning to use it wisely and carefully. We can start by not wasting water. Don't leave the water running when you brush your teeth, take showers instead of baths, fix leaky faucets and keep drinking water in the refrigerator rather than running the faucet to get the water cold. Do your part to help conserve water so there is enough to go around for years to come!

Dams are another way that water is managed. Dams can collect water for future use and control the flow of water to prevent floods. Dams are constructed in an existing river to slow the flow of the water. This creates a man-made lake known as a reservoir.

Power can also be created using dams. This method of power generation is known as hydroelectric power or hydropower. Hydropower is energy that is generated from the flow of water using huge power generators placed inside dams. The water flowing through the dams spins giant turbine blades which are connected to generators. The power produced is sent to homes and businesses in the form of electricity. To learn more about Hydropower visit the Foundation for Water and Energy Education here.

Geysers are an amazing site to see. A plume of water that sprays from the ground ‐ sometimes at regular intervals ‐ is known as a geyser. But what causes a geyser? Groundwater in some parts of the world comes in contact with rocks that have been heated by the forces of volcanic activity. The heated water must reach a boiling temperature in order for a geyser to occur. But if it indeed does reach these extreme temperatures, steam forces the water out of the ground like a pot boiling over. Sometimes there is enough pressure built up to spray the water and steam great distances into the air.

How Much Do You Know?

Check out these challenge questions, quizzes, and surveys from the U.S. Geological Survey to see if you know the answers to intriguing questions about water, such as "Are raindrops tear-shaped?", and "How much water does it take to grow a hamburger?" Good luck!! 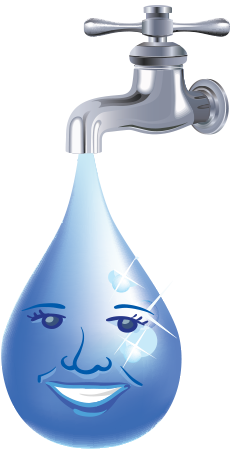