Take a look outside your window. Is it sunny or cloudy? Is it raining or snowing? Weather is what is going on in the sky and the air outside your window! Weather refers to the state of the atmosphere at a certain time and place. It includes the current temperature, moisture, wind, and cloud cover. It also includes things we cannot see, such as air pressure, humidity, and solar radiation. Extreme events, such as tornadoes, hurricanes, lightning and monsoons, are also part of weather.

Weather changes from day to day, and sometimes even from hour to hour. It might be sunny and warm one day, but cool and wet the next. Weather is constantly changing because air is continually moving and interacting with the sun’s energy. Weather is temporary, which is why people often check the weather forecast to see what kind of weather is predicted for tomorrow. Climate, on the other hand, describes the average weather patterns in an entire region over a long period of time – 30 years or more. A desert can still have an occasional rainy day (weather), but the general pattern does not change; it’s still a hot, dry climate. There is a saying that describes the difference: “Climate is what you expect, weather is what you get.”

Why should we study the weather?

Weather affects nearly everything we do. It influences the clothes we wear, the activities we do, and even the foods we eat. It especially impacts people who work or play outdoors. If you are a pilot, a construction worker, a fisherman, a farmer or even someone going on a vacation, you will want to know how the weather will affect you. We also study weather in order to keep people safe in the event of extreme weather conditions. Meteorology is the study of weather, and meteorologists are scientists who collect and interpret data about weather.

What is the atmosphere?

In the darkest regions of deep space, the temperature is a chilly - 450° Fahrenheit. Closer to our Sun, temperatures can reach thousands of degrees Fahrenheit! What makes Earth's climate so perfect for life? It’s the atmosphere, the cocoon of gases that separates Earth from the extreme climates of space.

Why are there clouds in the sky?

There are many kinds of clouds and each one signals a different kind of weather. Cumulus are puffy mid-level white clouds made of water and ice, usually associated with fair weather. Cirrus clouds are high up in the troposphere and are wispy and thin due to the strong winds at that altitude. Though they are composed of ice, they are usually associated with pleasant weather. Stratus clouds, which form in lower parts of the troposphere, consist of water droplets and cover most of the sky with an even, gray color similar to a fog, which can signal light rain. Cumulonimbus clouds are tall, dense clouds shaped like a block or anvil. They signal thunderstorms as well as violent weather effects such as hail and lightning. Fog is a cloud that is so low that it touches the ground.

Learn more about how clouds form and view images of cloud types.

So what causes weather?

All of our weather is created from the same basic things: heat from the sun, and the movement and moisture content of the air. These factors combine together to form clouds, to make rain and thunderstorms, and to cause winds to blow. The sun emits energy at an almost constant rate, but a region receives more heat when the sun is directly overhead and when there are more hours of sunlight in a day. The high sun of the tropics makes this area much warmer than the poles, which receive less direct sunlight.

Wind blows because of the uneven heating of the air by the sun, and because air has weight. The sun warms the atmosphere to different temperature levels in different places. Warm air, which weighs less than cold air, expands and rises. Colder, heavier air moves in and replaces the rising warm air. This movement of air is what makes the wind blow.

Air pressure refers to the pressure exerted by the gases in the air. Areas of less pressure are called low-pressure systems and often create wind and stormy weather. High-pressure systems have more pressure than their surroundings and are often associated with clear blue skies. Wind usually blows from areas of high air pressure to areas of low pressure. If the high pressure area is very close to the low pressure area, or if the pressure difference (or temperature difference) is very great, the wind speed can be very fast. Winds bring changes in the weather, such as clear sunny skies or heavy rain.

Both wind speed and wind direction are measured by meteorologists. Wind is measured with an instrument known as anemometer. It spins with the breeze to clock the speed of the moving air. Wind strength is also measured on a scale known as the Beaufort Scale. This scale is designed in such a way that wind intensity is determined by user observations, not by measuring the wind with instruments. So if smoke from a chimney is just barely disturbed by a breeze, the wind is determined to be a 1 on the Beaufort Scale. The trees sway when the wind is at a 5. A hurricane would score a 12, the highest measure on this scale. Check out this diagram of the Beaufort Scale and observe wind in your area.

Air masses are large volumes of air with about the same temperature and moisture content throughout the mass. Sometimes they are warm and sometimes they are cold. When warmer and colder air masses meet, it is called a front. That’s where a lot of weather happens! Meteorologists watch the movements of fronts to help predict the weather.

What causes thunder and lightning?

When cold air meets warm air, the cold air sinks under the warm air, forcing it to rise quickly. The rising air takes water vapor with it, which cools and condenses. When large amounts of moisture combine with unstable air that rises quickly, the result can be tall cumulonimbus clouds, sometimes called thunderheads. Thunderstorms usually bring heavy rain and strong winds as well as lightning and thunder.

Lightning is an electric current. It happens when ice particles bang together in the cloud, building up positive and negative electrical charges. The positive charges are at the top of the cloud, and the negative charges are at the bottom. The negative charges at the bottom of the cloud are attracted to the positive charges on the ground. The ground’s electrical charges are concentrated around objects that stick up, such as mountains, single trees, or even people. When the charge from the ground connects with the charge from the bottom of the cloud, the result is a flash of electricity known as lightning, which heats the air around it. The air in the core of a lightning bolt has been estimated to be as hot as 54,000 degrees Fahrenheit -- about six times hotter than the surface of the sun! The heat causes the air to expand with an explosive force, resulting in a loud boom we call thunder.

In addition to thunderstorms, there are many other kinds of powerful weather events. Tornadoes happen when hot and cold air masses collide into a violent windstorm. The counter-clockwise spinning wind can reach huge speeds of up to 300 miles per hour. If the spinning cloud touches the ground it will be classified as a tornado. If the spinning cloud only drops out from the storm, but does not actually touch the ground's surface, it is known as a funnel cloud. Tornadoes can be very unpredictable and very destructive. The United States has more tornadoes than any other country in the world, averaging around 1200 a year.

Hurricanes are massive storms that begin out over the ocean. They, too, form a counter-clockwise spinning wind around an “eye” in the center. Their size can be up to 600 miles across, with winds of 75 to 200 miles per hour as they travel across the open ocean. Hurricanes gather heat and energy through contact with warm ocean waters. They can last for days and can bring severe rain, wind and flooding far inland from their original beginnings.

Hail is a form of precipitation that occurs when drops of water freeze in a cloud formation, begin to drop toward the earth, but are blown back up into the cloud where new layers of frozen moisture are formed. Hail can be tossed up multiple times. With each layer, the hail becomes bigger and bigger as the hailstone forms another coating. In July 2010, a hailstone fell in South Dakota that had a diameter of 8" (20.3 cm) and weighed about 2 pounds! Hailstorms don’t usually last very long, but they can cause significant damage to farm crops and property.

Other severe weather events include blizzards, microbursts, heat waves, floods, droughts and extreme cold. When the weather involves serious conditions, safety is very important. Knowing in advance what to do and following the weather reports in your area can keep you and your family safe. Learn how to protect yourself and your family by reviewing these safety tips from the National Weather Service.

How can we forecast the weather?

Daily weather forecasts involve the work of thousands of observers and meteorologists all over the world, and the work of thousands of machines. Modern computers make forecasts more accurate than ever, and weather satellites orbiting the earth take photographs of clouds from space. Weather forecasts made for 12 and 24 hours are usually highly accurate. A five-day forecast can accurately predict the weather about 90 percent of the time, and a seven-day forecast can accurately predict the weather approximately 80 percent of the time. However, a 10-day forecast is only right about half the time. Learn more about weather forecasting and weather maps.

Take a look at current satellite images of US weather.

Tools of the trade

People have been forecasting the weather for centuries. They once looked to plants and animals for hints about the weather. Before it rains, ants move to higher ground, cows lie down, pine cones open up, frogs croak more frequently, and sheep's wool uncurls. Before technology, folks also made forecasts by studying the clouds.

You may have heard that groundhogs can predict the length and severity of winter weather. Groundhog Day, which is celebrated on February 2 in the United States, is based on ancient Celtic beliefs that if winter's midpoint was sunny and clear, winter would be long and cold. Nowadays, in the U.S., a groundhog named Punxsutawney Phil is the center of the celebration. If he sees his shadow, it is thought that this signals a long winter. Unfortunately, Phil's "predictions" have been accurate only about one-third of the time.

Head outside, study the weather and become a junior meteorologist! There is always interesting weather to observe, and your own eyes are the best weather observation instrument of all. Keep an eye on the sky! 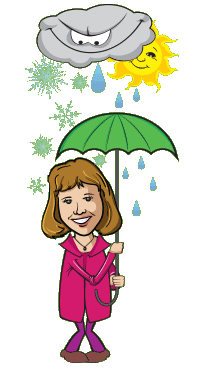